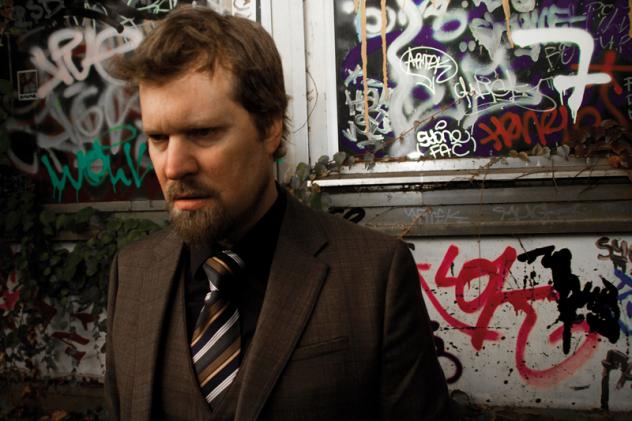 Queen of denmark, king of hearts

After an interesting but perhaps obscure career as leader of The Czars John Grant launched himself as a solo artist last year with an album that was hailed as a ‘classic’ by music critics. Getting to that point involved a total rethink of his life and more than a few tears. We talked to him about this new artistic departure recognised internationally, about being gay in a hostile climate and about Tracy Chapman ...  A real straight up guy.

After the Czars split up you retired temporarily from the music industry. What did you do during that period and what made you want to play music again?

Well, I wasn’t sure if I wanted to play again. I had a difficult struggle with alcohol and drugs, but I got over it and moved to New York City which was something that I always wanted to do. There I was waiting tables at a very high class, very well known restaurant. It was a very difficult job, it was like getting an education, you know, you are dealing with wines from all over the world, and learning lots of things about wine and food. And while I was working at the restaurant, I started to study at NYC University in a programme to become a Russian medical interpreter…

This sounds a bit strange...

I studied Russian for many years when I lived in Germany and I’ve always found medicine very interesting, so it was a chance for me to learn about the human body, and being an interpreter in a hospital. I got my credentials and I started working at the New York University Hospital. This happened around the year 2006.

That was quite a change from making music!

Actually, you use some of the same things in your mind that you use in music, because it was very creative work, you have to be very flexible at interpreting; but it is indeed quite different, I felt like I was too old and I wasn’t being successful in the music business, I wasn’t good enough at it, but my relationship with Midlake changed those things and they convinced me to take the risk again.

How did you meet the Midlakes?

We were with the same record label, we met in Texas many years ago and we became friends. They knew that my band had split up and that I wasn’t sure of what I wanted to do anymore, and they asked me to play with them a couple of times when they came to New York. They decided they wanted to be the ones to play in what would be my first solo album. After a couple of years they convinced me that they were really serious about it, so I decided to give it another try.

How did the new songs come about?

They all came about in different ways.

Yes but you can see a sort of unity in your album.

Yes, there is definitely a cohesiveness but to an extent on this album there are a lot of negative things. I think that the album’s cohesion comes from being about somebody who is experiencing a void in their emotions. You have love songs on there and songs about hatred with a lot of anger like “Queen of Denmark” or “Jesus hates faggots”. It’s the first time that I am being honest about who I am emotionally and during the second half of the album I was in love, and that is reflected on it too.

You weren’t that autobiographical before, were you?

No, never. I was afraid. I didn’t feel comfortable talking about things that openly.

And all this process deals with personal issues like coming out of the closet?

Yes, it has a lot to do with it. I had a difficult time coming out and this process is different for each individual. I had a very difficult time accepting that part of myself. It was a time of turmoil, but I’ve arrived to a place where I don’t care anymore and I am able to talk about it. It’s a great feeling. And also working with Midlake. None of them are gay, but I felt totally comfortable around them, because they love me so much as a person, they didn’t give a shit if I was gay or straight or whatever, they wanted me to just be myself. And that’s one of the things that made my relationship so great with them.

I guess that’s what we all want in our lives.

I also feel that the album has some sort of hope about this.

Yes, there is always hope, but it’s very difficult to see it at certain vanishing points, from certain angles. I had fallen into a deep hole where I couldn’t see anything further, but there is definitely hope in my work, because actually it really does exist and there is always a different way of looking at things, there are some moments when you can see life more clearly.

And talking about the songs and the lyrics, I see a connection with some of your songs like ‘Sigourney Weaver’ or ‘Jesus hates faggots’ with this problem that is happening in the USA about gay teen suicide and gay teen bullying. Is it difficult to be a gay teenager in America right now?

Yes, I think so. There is sort of a war now. There are a lot of people from the religious right who don’t want homosexuals to have rights, and I’m sorry but I think that those people’s lives are not based on love. It’s sort like how the Holocaust started, you know. When a certain group of people say that another group of people doesn’t have the same rights, horrible things start to happen. I think there is a huge group of people in the States that don’t want gay people to have rights because they don’t think that church and state should be separated, but the United States is based on the separation of church and state.

And what about some improvements like gay marriage in the state of New York.

Some things are getting better, but I also think that sometimes we are going backwards. We have more tolerance in some areas, but other areas are less tolerant. And that’s why I think that teen suicide is happening. Being different in a small town can be very difficult. People can make you feel miserable.

Going back to ‘Queen of Denmark’, it came out and you got rave reviews, some magazines like Mojo even called it the best album of 2010 and an instant classic. Were you happy about this and what were the pressures with receiving that kind of critical acclaim?

There is definitely pressure, but it’s something you have to deal with it. I must continue to be myself and make the albums I feel that I need to make, but of course nobody gave a shit about me before “Queen…”, and now people are expecting me to prove that I can do it again. As I said, I’m just trying to be myself and write music about how I feel, that’s all I can really do, but I am very happy about how the album was received, it’s something that I really needed.

You said that you wanted to achieve some kind of success and now you have it.

Yes but now you are reaching a wider audience.

Absolutely, I definitely achieved something very very big with “Queen of Denmark”, and that brings lots of great things and lots of negative things. One of the negative things is the pressure to write a new album… Do you remember Tracy Chapman’s first album? Do you remember how attached people were to that album? It was an amazing album, and some of those songs are still great today but... do you remember the reaction to her second album? Nobody really cared! There was one song out of it that did OK, but nobody gave a shit and people said things like “She’s done, we don’t care about her anymore”, and I think that’s because she did so well with her first record. It wasn’t possible for her to compete with her first record. I can write a new record, and try to compete with “Queen of Denmark”, which was really a very special record, but one of the things that made it special is that I was being myself, and if I continue to be myself, writing new songs that I like, I think that people will like them too, but in the end I can’t control that, and there is nothing I can do about it.

Are you writing any new songs now?

Yes, I’m writing my album right now, I have a bunch of new songs and I am excited.

Do you want to share anything about this new material, or can you tell us something about what the audience can expect from your next concert here in Barcelona.

They might hear a brand new song that nobody has heard before, but it depends if I arrive at a place where I can feel comfortable about playing it, but there is also a part of me that doesn’t want to play the new album until it comes out. I think that the new album has a lot of dark subject material, there is a lot of loss on it, but there is a lot of humour too, as usual in me, it’s going to sound like a James Bond soundtrack.

You mean like having an orchestra and brass section?

Yes, it will feature trumpets and trombones and stuff like that. I want it to sound like a John Barry production, like a film soundtrack. There are also pop songs in there, and I am trying to push myself to newer sounds and still be myself.

And now, to finish on a lighter note; you play Barcelona quite often do you have any favourite places or impressions of the city that you want to share with us?

I have not had the chance to get to know the city well yet, but what I like to do here is just walk around and I usually go to some little bar, have some tortilla or a coffee, and just be surrounded by people. I like its specific look, it doesn’t look like any other city, but I’m looking forward to getting to know it a little better. I also want to go to the Sagrada Familia.

I hope you don’t mind huge queues then?

I don’t mind. I really really need to go!

Interview published in b-guided #49, Autumn 2011, on the occasion of the John Grant concert, on November 8th at Sala Apolo, Barcelona