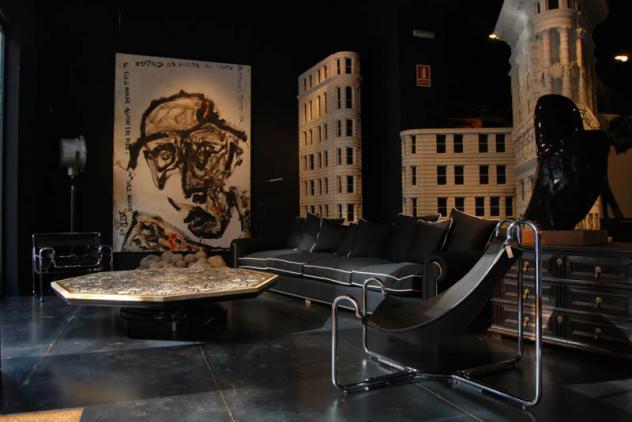 A singular and highly eclectic design showroom in Barcelona’s Eixample neighbourhood, a visit here is highly recommended for design enthusiasts who haven’t been yet. Its hangar like dimensions (occupying the entire ground floor of an Eixample building) are complimented by a moody lighting scheme and the art installations that are located throughout the shop. Loosely organised into zones which includes a range of kitchens, living room and dining room furniture, lighting, sculpture are other art works. The flooring consists of dark metal plate panels, the ceilings are tall and the furniture oversized, particularly noteworthy are the timber 1:20 scale models of famous architectural corners (including the Flat Iron building New York). Toni Espuch the driving force behind Azul Tierra is a successful designer who works all over Spain and abroad, specialising in residential and retail interiors. The showroom perfectly reflects the mixture of styles, epochs and genres that define his interior design projects. The Alicante native (where the first Tierra Azul was founded) has also produced several ranges of jewellery, furniture, light fixtures and table ware. He is a close associate of Lázaro Rosa-Violán, probably the most in demand designer of the moment, and has collaborated with him on several high profile projects.

B-Guided recently sat down with Toni Espuch in order find out more about his showroom and explore his thoughts on the current panorama of interior design in Barcelona.

The furniture and objects on sale here at Azul Tierra are extremely eclectic, sourced from India and other countries, traditional pieces as well as more contemporary designs. Does that reflect your own personal taste of is it connected with demand right now?

No, normally everything I buy is informed by my own intuition and not because of market demand because sooner of later the demand will appear, a project will come alon     g where the pieces can be used like with the models (the architectural 1:20 scale models of building corners). I don’t just buy in Asia I also buy a lot in Europe and Spain as well.

Do you find these pieces on your travels?

Normally yes, you have to see and touch the pieces first hand in order to really appreciate them.

Within the globalized context of the world we live do you think it’s still important to have a sense of place when we think about design and architecture?

I think that there is a part of the globalization process which is positive because we all have a view on what’s going on in other parts of the world, but you has to remember where you’re from and what is yours. Because of simple things like local climate conditions or other circumstances that mean doing things that you wouldn’t do in other places, living on a tropical island is not the same as living in a colder region, within specific places you get used to working with certain materials which you make your own over time and which could not be used in the same way in other places because they wouldn’t be right there.

You have travelled and worked abroad a great deal, what do you think differentiates the Spanish design sector from its European neighbours? The current recession has probably affected the design and interior design sector more than any other. Some of Bracelona’s most iconic shops have closed down. How have you managed to remain in business during this difficult time?

I think that you have to work a lot harder in order to achieve much less right now. Being disciplined and having a professional approach also helps undoubtedly, however just maintaining what you’ve got is quite a challenge currently. A little while back we closed Azul Tierra in Madrid. I found this space (Azul Tierra in Barcelona) fell in love with it and moved here. At a time like this you have to give more to your work and while before there were three showrooms which were undertaking design projects it became increasingly difficult so I choose one rather than dividing my attention in two. Right now I have Barcelona and Alicante, where I started off, I’ve got clients from over twenty years ago and even though I’m not there all the time they wait for me.

How did you first get involved with the profession, did you study interior design or learn on the job?

I started this project when I was very young, I really loved decoration and from there I started off doing interior design projects for other people.

Toni Espuch is originally from Alicante, where he started Azul Tierra more than twenty years ago and which is still open. The showroom is located within a refurbished bank distributed over two floors which shares the same design philosophy as Azul Tierra in Barcelona. Interior design projects are undertaken for hotels, restaurants, private residences, office and shops including the new Pura López shop in Rome, Plaza de España. In Barcelona Espuch has recently finished the interior of the L’Eggs restaurant located on Passeig de Gràcia.

As a designer whose work do you admire or whose work inspires you right now and can you name a few commercial or hotel interiors that you admire in Barcelona?

I’ve always liked the work of Francesc Pons (b-guided #21) he has a very different style to mine but he knows how to create a very elegant space. I also like Jaime Beriestain who I think is doing some really good work right now, his approach is very different to everything else at the moment (the Concept Store and Beriestain Café just opened on Pau Claris 167) and I’d also say Javier of En Linea Barcelona who does contemporary design really well.

Can you describe your working relationship with Lázaro Rosa-Violan and your involvement with projects like La Boca Grande, D.O. Plaza Real etc.?

We have a good working relationship with Lázaro, he sources a lot of the pieces for his projects from us but we work independently from one another.

Why do you think that Lázaro’s signature style is so successful right now? His retro-vintage combination of traditional with odd eclectic furniture that evokes the past.

I think that Lázaro is a very hardworking designer, he delivers to his clients and knows exactly what he’s doing. I also think that people are tired of cold anonymous spaces, Lázaro injects a little more personality, he brings spaces to life and makes tem appear as if they’ve been there for ever, people feel comfortable in them. He works mostly abroad, in England, Germany as well as some hotels in Barbados.

You have also collaborated with several design manufacturers, can you mention a few?

More than anything else I’ve worked with textile manufacturers like Lizo with whom I’ve been working or more than ten years, I also produce my own ranges of furniture and design working with crafts men and women, I’ve produced my own jewellery range … and then there are the furniture items which come up with for projects that we sell in the shop later.